Last week, we introduced you to John, who is experiencing increased stress as a result of recent increases in his workload.  In the course of the interview, he states he has a longstanding history of insomnia. Getting adequate sleep is vital to a number of functions, including memory, alertness, and mood. Needing sleep but find yourself fighting insomnia can be harmful to your body and mind.

How much sleep do you need? 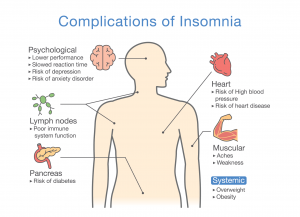 recommends 8-10 hours for teens, adults 18-65 should get between 7-9 hours, and those over 65 need about 7-8 hours.  As John is thirty-years-old and says he only gets about five hours of sleep on an average night. He appears to be sleep deprived. He realizes he’s having issues paying attention to details and is irritable with coworkers. It is likely that his current state of insomnia is contributing to these negative experiences.

John has made the connection between his concern about his decrease in work productivity and his lack of sleep. This only increases his anxiety about his sleeping habits.  He worries about his upcoming day at work. In his mind’s eye, he imagines himself snapping at an important client or boss, which jeopardizing his job. Alternatively, he worries he will make major errors on his paperwork, fearful his supervisors with notice. This makes it even harder for John to go to sleep.  The reasonable side of John is no longer in control – his insomnia snowball is getting bigger.

John decides he can fix the problem by changing his sleep regiment by starting going to bed earlier in the day. However, this has only resulted in more hours of him tossing and turning and even then only getting restless or sporadic sleep sessions.

John has to change how he handles his sleep habits and patterns. He is in a vicious cycle that will only get worse.

First, he has to reduce the level of stress associated with getting to sleep by challenging his catastrophic predictions. He mentally reminds himself of what occurs when he does not sleep well.  This is a stop-gap measure to helping him begin the process. He is still short-tempered and somewhat slightly less attentive the next day at work, but there were no major altercations or errors.

Second, John change needs to be decreasing the amount of time he spends in bed. While this may sound surprising, it’s actually quite logical. He associates his bed with restlessness, tension, and worry rather than sleep. One crucial aspect of his behavior is to do the exact opposite of his current process. If he can’t get to sleep or if he wakes up and can’t get back to sleep, John should get out of bed. Remaining in bed will likely cause more frustration and result in less sleep.

Distancing himself from his bed will produce long-term results of decreased frustration and anxiety. He will learn to see his bed as a tool instead of allowing it to amplify his agitated mental state. 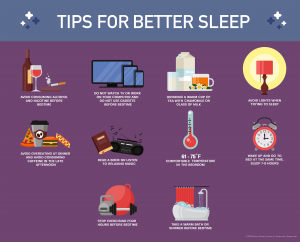 Instead of fighting insomnia, he needs to learn to soothe himself into a restful state of mind yet still provide positive mental engagement, preventing him from falling back into his negative loop. By mentally engaging in other quiet activities it prevents him from worrying as we discussed in our previous article.

Perhaps he can read in a quiet area of his home, listen to soft soothing music, simple coloring. By distracting his brain with something other than his own restless thoughts, he’s mentally engaged in positive but simple activities. Even if he does not sleep, it will give his physical body a chance to rest. The more often John adheres to this practice his body will learn to slow down and prepare for a restful sleep instead of a night of fighting insomnia.

The exact amount of sleep or the time John should go to be bed will depend on a number of factors. But generally, it should allow for a normal slowdown period before bed. John should sleep as much as his body needs, while still ensuring he does not worried about arriving at his job on time. This allows him to have more stress-free moments, contributing to his overall wellbeing. Instead of needing sleep and fighting insomnia he will find he can tackle the real issues more effectively.