Posttraumatic stress disorder – PTSD can occur after you have been through a trauma. A trauma is a shocking and dangerous event that you see or that happens to you. During this type of event, you think that your life or others’ lives are in danger. 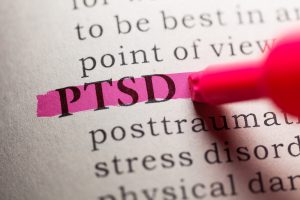 Events such as serious car accidents, physical or sexual assault, childhood abuse, natural disaster, military service in a war can create a situation where you or someone you know is suffering from posttraumatic stress syndrome – PTSD. Such events can cause difficulty sleeping, avoiding scheduled events, addictive tendencies, anger, extreme sadness, and isolation. Simple things like smell, music, food, sounds can trigger panic attacks, fear, nightmares, and even a sense of time loss as someone finds themselves reliving the event(s) over and over.

People who have PTSD also try to avoid reminders of the trauma, talking about what happened or will tend to avoid experiencing strong emotions. They may not wish to return to the place where the event happened or start to avoid situations that remind them of the event.  They may have difficulty sleeping, be watchful, or “on guard” all of the time. In the long run, avoidance maintains and worsens symptoms of PTSD.

PTSD can also result in strong negative feelings such as horror, guilt, or shame. People with PTSD often blame themselves or feel guilty after the event even though they didn’t cause it to happen. They may have a hard time trusting others or feeling safe. The enjoyment of life can be severely reduced for someone suffering from PTSD, and even compound the symptoms.

There is hope for those that suffer from PTSD. The Institute of Medicine has determined that Prolonged Exposure Therapy (PE) and Cognitive Processing Therapy (CPT) are effective for the treatment of PTSD. Instead of helping you cope with symptoms, the goal is to help make the symptoms better. These therapies have been shown to be effective for PTSD from many different causes, such as sexual assault, childhood abuse, and combat. The following video was created by the U.S. Department of Veteran Affairs – National Center for PTSD – Posttraumatic Stress Disorder.

Dr. Michael Simcha Lax provides effective, short-term treatment for those that suffer from PTSD. He utilizes Cognitive Processing Therapy, which is one of the main methods the VA uses to treat this issue. Dr. Lax is available by phone or video conferencing.

Dr. Michael Simcha Lax provides effective, short-term treatment for those that suffer from PTSD. He utilizes Cognitive Processing Therapy, which is one of the main methods the VA uses to treat this issue. Dr. Lax is available by phone or video conferencing.

For more information about PTSD and PTSD treatment, please visit